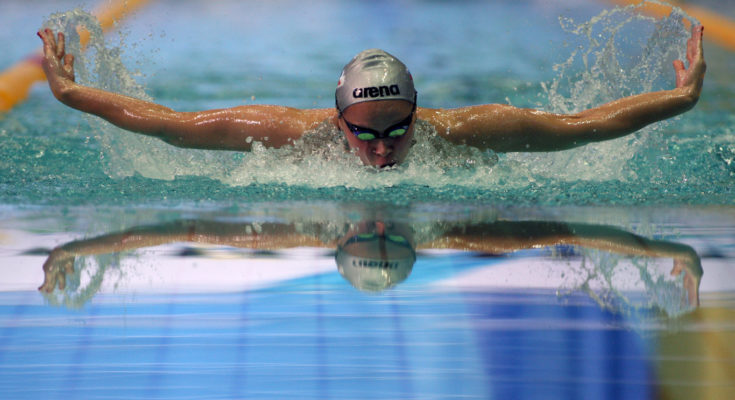 This year I’ve been struggling to get beyond a single mile. Life has been a pattern of busy, sick, busy, sick, busy — you can see the cycle of destruction.  And then there’s been the English 21st century weather. Swimming in the rain is not a problem, swimming in the open in thunderstorms is not so sensible. And thunder and lightning has been predicted almost every day of the «summer.» When I have been in the water, it’s been time squeezed into other things.

Last night changed all that.
The evenings are long and light — so it did not matter I was in the water at 7pm and unsure what time I’d get out. The weather app said there might be thunderstorms locally — but not to the north.

And there was another attraction to the north. In all the lakes I’ve been in recently the water has been brown. It’s been warm — but brown. There is only so much brown water your stomach can take. But to the north there is a quarry and the water is usually crystal clear.

What happens in the second mile? This is what it feels like. I struggled round the first mile, aching and ungainly, testing my breathing and my turning and my arms on every stretch. But by the second mile my arms and legs moved in harmony. The heart settled down to do what it needs to do. Energy reached the limbs, seemingly without their asking for it. The goggles were clear and stopped leaking. Swimming is automatic. I can enjoy the clarity, coolness and turbulence of the water, the lively cliff walls of the quarry and the sky above. I can even spend some time with my own thoughts.

And that’s the first time this year I’ve been able to finish a mile, take a short breather and then set off on the adventure of the second mile.

It’s the evening — and somewhere over the horizon it is raining. At the start of the swim the sun shines bright over the quarry edges, so bright that at one point it is blinding and I swim 50 yards turning my head to the right only. Then it dips and the surface of the water turns gold, reflective gold. I am swimming through gold. There is golden light through the trees on one side of the quarry.

And on the other side, in the blue sky above the high cliffs, there is a rainbow. A proper, semi-circular rainbow sitting in the sky. It’s there for the best part of a lap.

And my movement is so fluent and so joyous I could be an aquatic animal. It feels like when you jump in the water and swim to a near by island, like being in clear, still tropical sea-water, like being among giant otters I saw on BBC4 the other night.

It was so glorious I could have carried on. I’d enjoyed a heron, a rainbow, a shoal of fish — but still no  sighting of the legendary pike. But why spoil a good night? I’ve not entered any long-distance events this year and I’d be struggling if I had. I got out after eight times round — two miles — with the sun setting over the edge of the quarry.