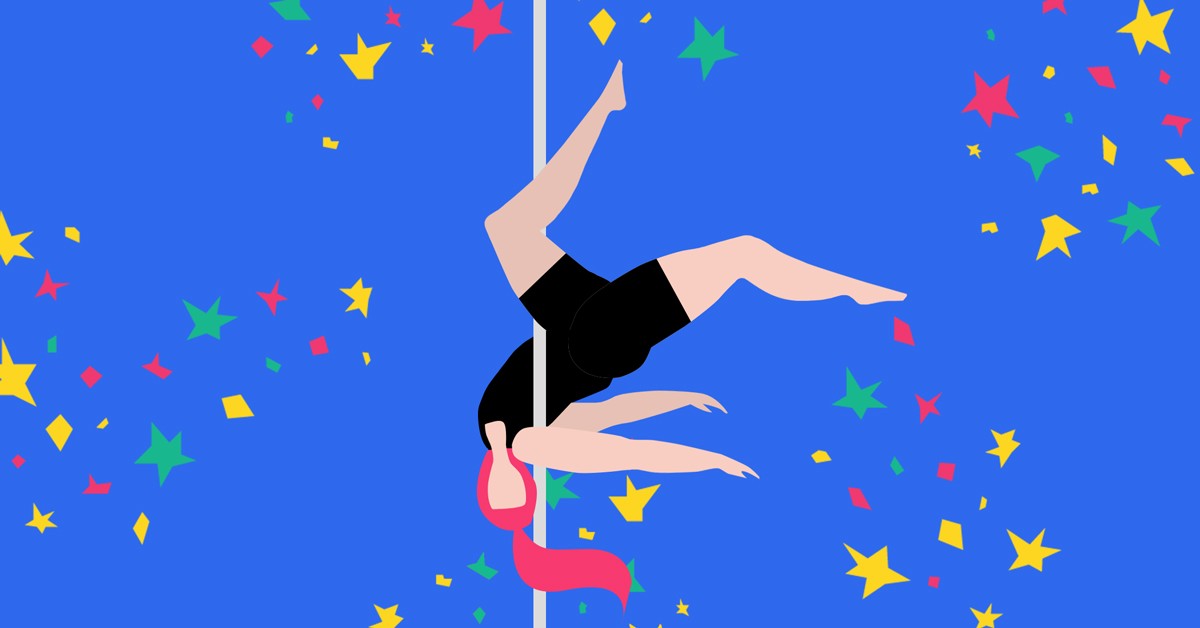 Hands down, FKA twigs’ Cellophane is captivating AF. From her ornate bustier and goosebump-inducing heel clicks, to an eerily human robotic phoenix, and that clay bath closing scene… the video is a work of art.

But even more impressively masterful is her command of the pole, which she reportedly dedicated over a year of training for. It was time clearly well spent!

In the video, she effortlessly contorts around the apparatus. She suspends herself midair, upside down in a 180-degree split by her thigh skin alone (a Jade split, as it’s known).

And that strength and feminine power in contrast to the vulnerability within the lyrics? Gorgeous.

“[T]o be asking somebody ‘Didn’t I do it for you?’ while doing these amazing tricks on the pole and getting your life… it’s sick and it’s funny and it feels powerful,” the artist says, in the making of a short film about Cellophane.

Before ever trying pole, I flunked out of the “Couch to 5k” program — a jogging program literally designed for couch potatoes.

I bailed on yoga. I couldn’t find my way around gym equipment, and my collection of Tae-Bo DVDs gathered an impressive layer of dust before I admitted defeat. I bemoaned that fitness just wasn’t for me.

But pole was different. I didn’t bail. Instead, pole dancing brought out a powerful, get-your-life feeling that gave me a voracious appetite for more.

As a dirt-poor college student, I shelled out $260 of my own money for eight weeks of classes that required a 75-mile journey both ways.

After that, I invested in my own home pole and dedicated more hours to pole videos than I did to my college textbooks. Seven years in, I can say it’s the one type of fitness that has stuck for me.

It turns out that even though pole got me fit, the workout itself is only a small part of its significance on my well-being.

The biggest impact pole has had is a complete makeover of my relationship with my body, my sensuality, and the way I view other women.

Exercise doesn’t have to be punishment

Unlike other workouts I’d tried, pole became a whole lifestyle, replete with 8-inch stilettos, rhinestones, and the ideology that the goal is not to conquer my body, but to enjoy it.

Pole and I get along so well because it doesn’t feel much like exercise.

What you’ve heard is true — pole dancing will give you incredible core and upper body strength, but the gains are a secondary consequence of other goals.

For example, when you’re practicing an invert — a move in which you lift your butt over your head and stay suspended above ground only by your two hands and the sheer stability of your core — you’re focused on going upside down successfully.

Not the 100 bodyweight crunches you happen to be accomplishing on the pathway to nailing it. In fact, I wanted to practice all the damn time because nailing an aerial move literally feels like flying.

What’s more, I didn’t have to be strong or technically gifted to start having fun or feeling like it was ok for me to be in class.

Other dance classes for adults, full of lifelong dancers (something I was not), had caused a certain type of mental anguish over my own capability.

But the pole studio walls are a safe haven: If all you can do is walk around the pole and twirl your hips — congrats, you’re a pole dancer!

Nurture your body and it will pay you back in kind

When I first took up pole, I was wildly depressed and had completely stopped eating. In one of my beginner classes, I passed out cold because I was so malnourished.

As I grew more intoxicated by the sweet taste of physical accomplishment — climbing 12 feet in the air, hanging by a single leg, whirling around in one-handed spins — I began dreaming of what was possible.

Defying gravity, flat splits, walking on the ceiling! My relationship with food became something it had never been before.

Food is fuel, a way to show respect to my body. Food is a vehicle, not a barrier, to the things I want. Because I want to be strong more than I want to be skinny, restriction and bingeing gave way to consistency.

And amidst my depression, pole was my motivation to get out of bed every day.

Practicing taught me forgiveness and self-compassion. There’s a line in my diary from around this time that says, “I will get up and try, and if it doesn’t work, then I can get back in bed. And I will try again tomorrow.”

I understood that I had to treat my body correctly if I had any hope of attaining the pole tricks I admired most.

Even now, in a healthier mental state, I make smarter judgement calls on behalf of pole practice, like, Hey, maybe opt for a grilled chicken salad instead of two cookies for lunch, eh?

Pole has played an integral role in undoing years of ingrained messaging about what’s beautiful — teaching me to appreciate what my body can do over what it looks like.

Thanks to pole dancing, my arms are strong and thick, and to be honest, they often look somewhat beefy in pictures. During times of particular intense training, some might even use the word “manly.”

Still, I don’t balk at their mass. I admire their size and definition and know that it means that my body is capable of incredible feats.

Bony shoulders and biceps may code as more feminine, but they’ll never hold my body out sideways.

Besides, learning to pole dance is more than strength and tricks, it’s about learning grace, strutting in heels, and as FKA twigs aptly demonstrates, articulating my hips and spine in a way that feels delicious no matter what my body looks like.