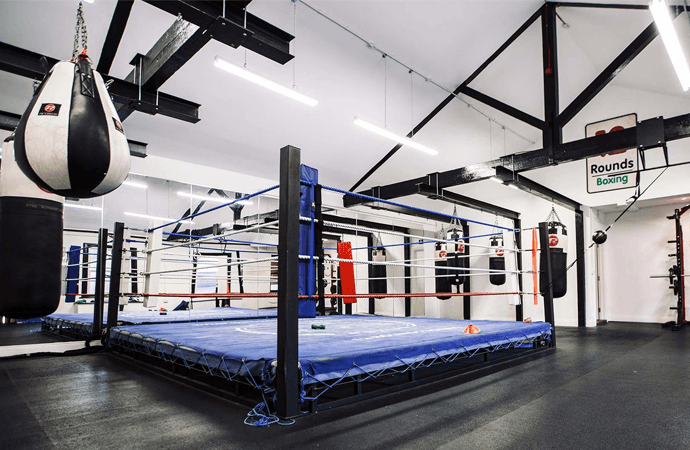 Upon hearing the word “boxing,” visions of Rocky, loose teeth, and bloody noses used to pop into my head. But when I finally mustered the courage to take my first boxing class, I was totally surprised.

It wasn’t gritty and filled exclusively with pro-athletes like I imagined, but inviting, a ton of fun, and a great workout. People high-fived (gloved?), the music was bumpin’, and I left feeling like a total badass. Needless to say, I was instantly hooked. So if you’re feeling hesitant about slapping on some gloves, here’s what you should know before you take your first boxing class:

If you’re more of a lover than a fighter, know this: Not all boxing classes involve sparring with an actual human being. There are plenty of boxing studios popping up around the country, like Shadowbox and Rumble, where you’ll experience a combination of shadowboxing, punching the heavy bag, and conditioning exercises like burpees and ab work. Think about what you’re wanting to get out of the class before signing up: Are you looking for a new, fun way to get fit? Look for a class that incorporates other exercises. Are you trying to improve your boxing skills? Choose classes that’ll focus on punches, footwork, and defensive movements.

We’re not saying you need to drop cash on a bunch of new equipment, but a few things are worth noting when it comes to boxing gear. First of all, you’ll need wraps (like these, from Sanabul) to protect your wrists and knuckles, and gloves. Some studios even offer wraps for purchase when you arrive for class.

Gloves aren’t the most compact accessory to tow around town, so check if the gym you’re headed to has gloves to rent. And don’t let the idea of sharing boxing gloves with strangers gross you out too much—like cycling shoes, studios typically clean them pretty thoroughly. Of course, if they make you feel like a badass, you can buy your own at a relatively cheap price on Amazon.

As for shoes, pick supportive training sneakers that’ll help you move and pivot with ease throughout the class. If you start getting more involved in the sport, you can invest in a pair of boxing shoes, which are lightweight and provide good ankle support.

3. Don’t stress about the cueing.

“Technically there are only four punches,” says Shadowbox trainer Radichell Lopez. The punches are words you’ve definitely heard before on TV: jab, cross, hook, and uppercut. “And to break it down and to get you to understand the sides of your body, we say ‘lead hand’ and ‘backhand’.”

When terms like “slip,” “duck,” and “roll under” come flying at you, focus on practicing one at a time. The more comfortable you get with the punches, the easier incorporating defense into your combos will be.

And remember that boxing is a skill that takes time to learn. “I’ve been boxing for 11 years and I’m still learning,” Lopez says. “Go in with an open mind and try not to get frustrated if you don’t catch on immediately. Boxing is a lifelong skill, and that’s the beautiful part of it.”

With boxing, the physical benefits are just part of the equation. “Boxing ramps up your metabolism, builds strength, and improves hand-eye coordination and core stability, but it also focuses the mind, relieves stress, and builds confidence,” says Kyle Shneider, a coach at BoxUnion.

Julian Devine, an instructor at Rumble, agrees, saying the sport can be extremely therapeutic. “We’re human—we all have something we’re holding on to that we really can’t say aloud,” he says. “The best therapy you can give yourself starts the minute you hit the bag.”

In the same way that runners nod as they pass each other in the park, there’s a silent bond that links all those who box. “I had my gloves attached to my backpack when a retired pro fighter came up to me and said, ‘Keep up the good work son,’” Devine says. “It was so affirming—I was like, ‘Alright, let’s go.’”

Group boxing classes have taken something that was once intimidating and exclusive and turned it into a workout that’s accessible and fun. If you’re feeling nervous about your first class, ask a friend to join you—there’s a surprising camaraderie that comes with hitting a heavy bag alongside dozens of other people fighting their own fight. Who knows—you both might just find your new favorite workout.